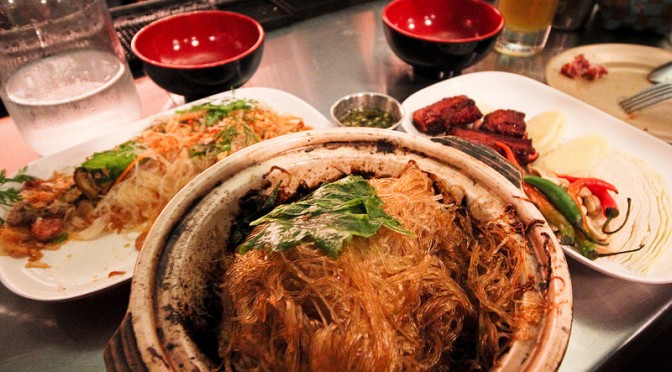 If you’ve ever wanted to eat out in a Michelin star restaurant but have been kept back by the high prices, you should try New York. As Michelin stars are not as well known in the US as they are in Europe, prices for them in New York are not inflated, and especially Asian restaurants with the coveted stars provide affordable options for enjoying quality dining. Here’s three options I’ve tried:

So far the only two-star Michelin restaurant I’ve been to, the Japanese restaurant Soto lived up to the expectations. It’s located in Greenwich Village, and to find it, you need to know where it is, because there are no signs outside. The wait staff is quiet but keen-eyed to tend to you, and the food is of the “how on earth has this been done” type. Fish in Soto is guaranteed to be fresh, because the restaurant ships it in by air five times a week.

The concept in Soto is to first taste the small and large dishes and then fill your appetite with sushi. The omakase menu (chef’s recommendations) would have been $170 per person, but we ended up picking our own dishes and the bill ended up being considerably less, even though we ate to our heart’s content. We shared six dishes with the two of us – a starter soup, two small dishes and three large ones – and ended the dinner with three nigiri and two roll sets per person, and it was more than enough. We thought the best dish was Cyu Toro Tartare, but every single dish was a good one, and one of my personal favorites was Ika Konowata (squid, sea urchin, quail egg), because fermented sea urchin turned out to be one of the most delicious ingredients I’ve run into in a while.

Judging by reservations, Soto seems to be a pretty popular restaurant, so put yours in early. If you don’t, your other option is to just show up and try to get a seat at the bar, where they don’t take reservations. On a Saturday evening, it looked like locals were popping in for just a set or two of rolls, and even though seated diners were dressed in mostly business attire, diners at the bar were a lot more casual, and one of them seemed to come in straight from a run.

On a Sunday evening, we were looking for something inexpensive but high quality, so we headed to Pok Pok Ny. This Thai restaurant in Brooklyn doesn’t stand out with its prices – but it does stand out with tasty food that brought it a Michelin star.

For starters, we got deep-fried pork riblets (Naem Sii Khrong Muu Thawt), of which the only bad side was that they were only a starter. I wouldn’t have minded them as a main! We continued then with a shrimp mussel pork noodle salad (Sunny’s Yam Wun Sen Chao Wang), where the water had asked us if we liked spicy. We said yes, but it turned out to be actually too spicy for me, although Iiro loved it. We also had a noodle one-pot dish with king prawns and pork belly (Kung Op Wun Sen), and this for me crowned the evening, especially the green sauce that we only realized to mix in half-way through the dish.

We didn’t have a reservation, and on a Sunday evening around 8pm, we got seats at the bar with zero wait time. We were asked if we wanted to wait a bit for a table, but we were fine dining more casually this time. The restaurant had the ambiance of a local diner, everyone was dressed casually and service was heartwarming. This was nothing like the fine dining experience you could expect from a Michelin restaurant in Europe, and that’s alright. If casual tasty Thai is more your thing, I recommend making the trip to Brooklyn – and maybe checking out the other locations, as Pok Pok is a small chain with restaurants also in Los Angeles and Portland.

Pok Pok Ny, 117 Columbia St, Brooklyn. You can make a reservation online, but around half of the tables are left for walk-ins.

Torishin was our first Michelin star experience in New York, an unforgettable evening in a dimly lit smokey yakitori restaurant where the chefs were cooking the skewers right in front of our eyes. Since then, the restaurant has relocated from Upper East Side to Hell’s Kitchen, a more central location from a tourist’s point of view. A reservation is a must, and one should be prepared to interpret the wait staff’s heavy Japanese accents. You’ll get by the easiset if you take the chef’s omakase menu ($99 per person) and nod yes to everything they propose to you – and you won’t go wrong with that, because it’s all terrific.

The menu at Torishin is mostly Japanese chicken skewers, from all possible parts of chicken, with all possible levels of cooking and spices. Giblets are visibly featured on the menu, and some of the skewers are left rare. If this bothers you, you can always say no, but half-done chicken is actually surprisingly good, and this is one of those places you can actually afford to try it without a salmonella scare. The menu also features vegetarian options, as does the omakase, so it’s not all chicken. The dinner is finished off with a donburi – rice with chicken, egg, or fish – which I could only taste as I was completely full at that point.