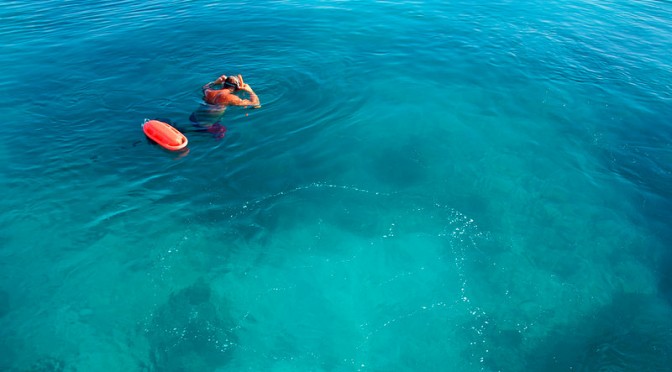 Dip, skip and a splash into the Caribbian sea. The water’s not cool at all but pleasantly warm, and high salt levels buoy me up in the turquoise calms. A peak under the surface reveals a school of fish swimming away just a couple meters from me, weaving their way through a coral reef. I could spend an eternity breathing through the tube and slowly floating on top of the reef. This is paradise. 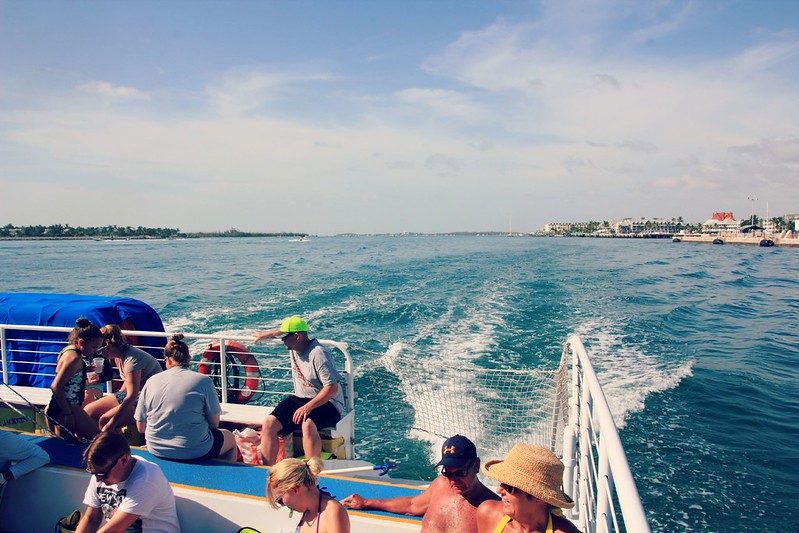 Just an hour earlier we were seriously late. Searching for a parking spot in Downtown Key West is easier said than done, and it would have been best to arrive on foot, but we didn’t have a moment to lose. So we ditched the car into the ridiculously overprized parking hall at Hyatt and ran to check in at Fury Water Adventures office. Finally we were last ones boarding the catamaran, but at least we made it. Now it as time to relax! 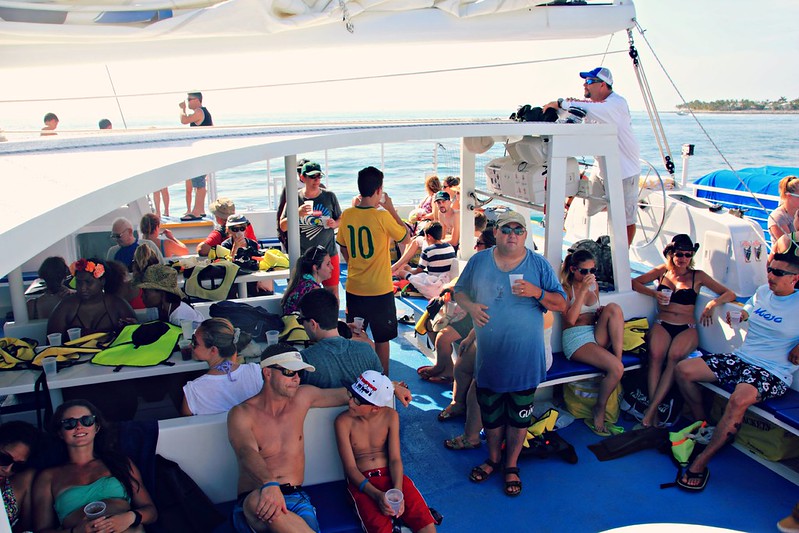 It took around 45 minutes for the catamaran to reach the reefs, and we spent that time adding on sunblock and enjoying cold Coke on the deck of the catamaran. All drinks were included in the price of the trip, but alcoholic beverages were only available after snorkeling = a sane policy if any. The theme of the cruise was Rum & Reggae, and while the rum had to wait, reggae blasted away from the beginning.

At this point, I also finally had time to open my new SD card from its package. I’d bought it the same morning from a shopping center in Miami, and the salesperson had recommended a 64GB card, so I was sure to have enough space for videos. The price was right, so why not? Well, I got an answer to that as soon as I popped the card into my GoPro, which immediately told me it was too large to use. No underwater photos or videos from this trip… and the lesson learned is that always test these before you’re on a catamaran somewhere in the middle of the sea!

Below the surface, the sea was teeming with life. We saw all kinds of scurrying fish in all colors of the rainbow, which we later identified with a little help from Wikipedia as banded butterflyfish, grunts and porkfish, among others. The reef itself didn’t impress us, but the life that surrounded it did. Elina has also snorkeled in Thailand and Colombia, and she thought this was her best snorkeling experience as of yet. Here’s a taste of what it looked like underwater:

in the end, the most memorable lifeform I saw was a small round jellyfish – or what I thought was a jellyfish until I googled about it and found out about comb jellies. They look like jellyfish but aren’t really, and they don’t have a sting. 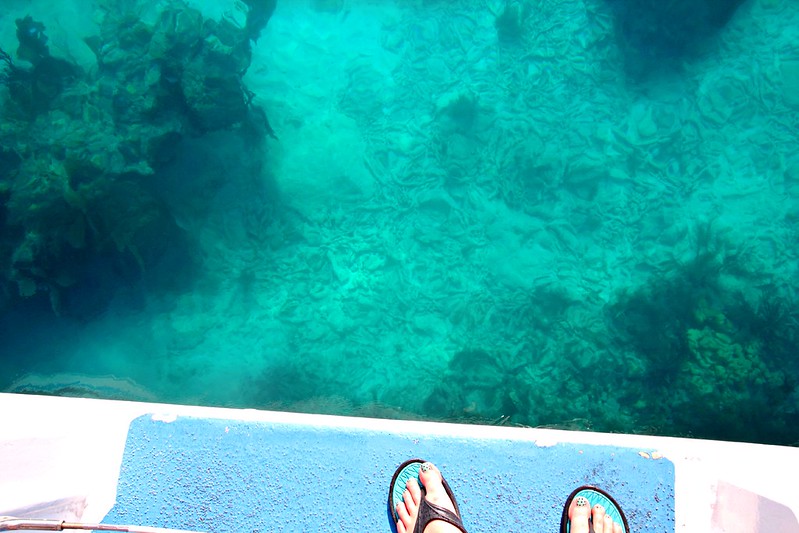 We wouldn’t be ourselves if everything had gone exactly as it should. When Iiro jumped into the water, the plunge made him drop his snorkel. I reacted quickly and dove to get it, but ended up kicking so hard that one of my fins came off. Luckily Fury had a couple of guys in the water with us, and one of them dove down to retrieve our missing equipment. I guess he was a pro when it came to diving for tourists’ dropped stuff, because I think he stayed down there for almost a minute. After this incident, I soon figured out that almost an hour in the water was enough for me and climbed back abroad the catamaran for that promised rum punch.

The return trip to Key West took a bit more than an hour, because we lingered long enough to marvel the amazing sunset – us and the whole Key West fleet, all with the same agenda. When finally the sun had set behind the horizon, the captain steered to shore and we got to continue our evening with a dinner in a nearby restaurant. Key West is known for its sunset carnivals, but I think this sunset cruise probably could top any carnival. 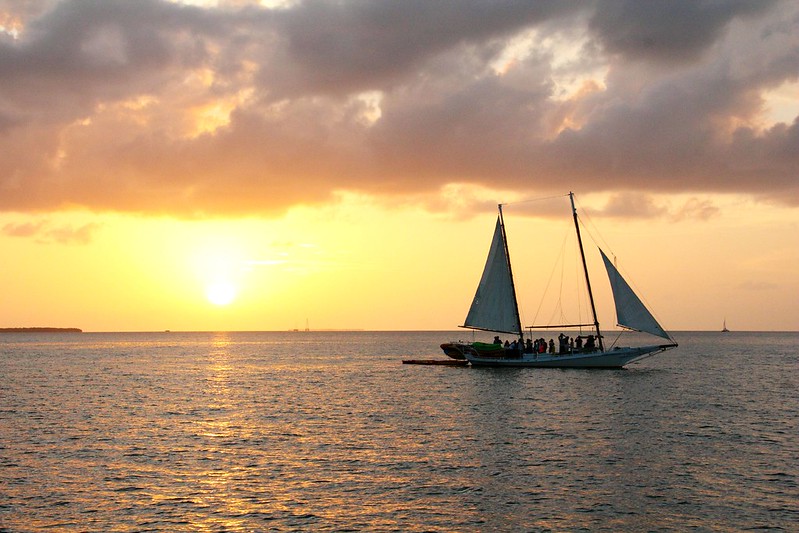 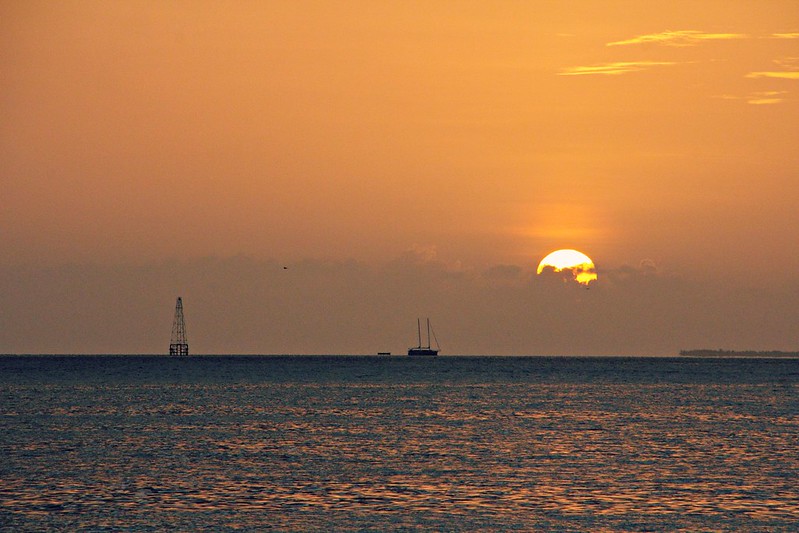 Overall the trip was a great experience I can warmly recommend to anyone who enjoys a bit of a swim. For a bit of live action from the deck, check out this video I shot: