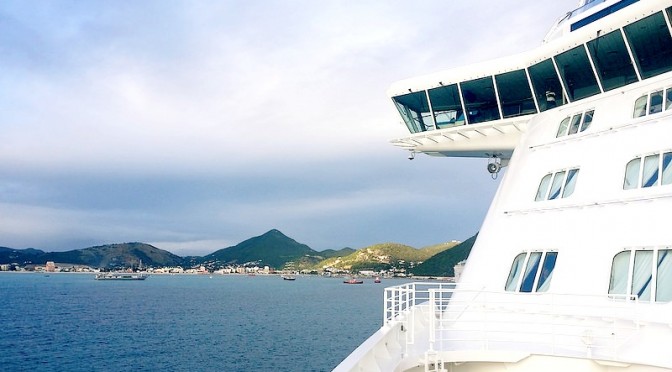 Midway through our honeymoon, I was already sure of it: this Caribbean cruise is best vacation I’ve ever taken. Of course it’s big thanks to the splendid company and romantic newlywed feeling, but since I’ve been traveling with my husband for already 10 years before we got married, there must be other reasons, too. Here they are:

Before this trip, I knew virtually nothing of the Caribbean islands, and in my mind they were all more or less the same: beaches, beaches and more beaches. Wrong! This I realized already on our second port day, when we arrived from the Hawaii-esque US Virgin Islands to a considerably poorer island of Saint Kitts, faintly reminding me of a past trip to Africa.

Instead of spending the days shopping like the cruise advised us to, we immersed ourselves in the history of these islands – and especially Saint Kitts and Barbados were full of it. The indigenous people, colonization, slave trade and sugar cane industry all came up repeatedly as we toured the fortresses and plantations. At Barbados, world famous for its rum, we toured an old sugar cane plantation, where rum is still distilled with traditional methods. Bridgetown was far less touristy than we expected, and the old buildings were simply beautiful.

On Saint-Martin, we were pulled back to the present day, and after Barbados’s “Little England” atmosphere, we were surprised by the feel of French Riviera. The creole English of Kitts and Barbados was gone and instead, I was listening to a language I barely recognized as French. Traffic was again moving on the right side of the road. Saint-Martin is of course divided between France and Netherlands, and on the Dutch side, we were faced with the first really touristy areas of the Caribbean – something we had been waiting to see from the beginning of our trip, but which in fact turned to be a rarity.

2. Island Time – there’s lots of it in the Caribbean!

Sometimes you spend so much time sightseeing that you come back home from a trip in the need of a vacation. Not this time! This cruise on the Caribbean felt like a real vacation without compromising on sightseeing and activities. This is mostly thanks to the couple of sea days when we were in no hurry to do anything.

This doesn’t mean we were bored. The ship was full of activities, all of it non-hurried. Laying by the pool, lounging in the hot tub. Enjoying a breakfast from room service on our balcony. Attending a lecture on the history of the islands (and falling asleep, just like back in university). Getting my day’s exercise with Latin dancing on the deck. Figuring out if I want to see standup, magician or dance shows before or after dinner. Getting my hair cut in the beautiful spa, admiring the waves through full-wall windows. The biggest adrenaline rush I got during the cruise was at the casino in a poker tournament (which I won!). I felt tempted to go again later, but was “too busy” writing post cards and listening to the jazz band in a lounge.

The islands also were taking it slowly. Because they’re so small, one day will already give you a feeling that you’ve seen them. Not all, and not enough to never come again, but enough to leave satisfied. Especially when you can admire the receding shore with a glass of champagne on the ship’s deck. 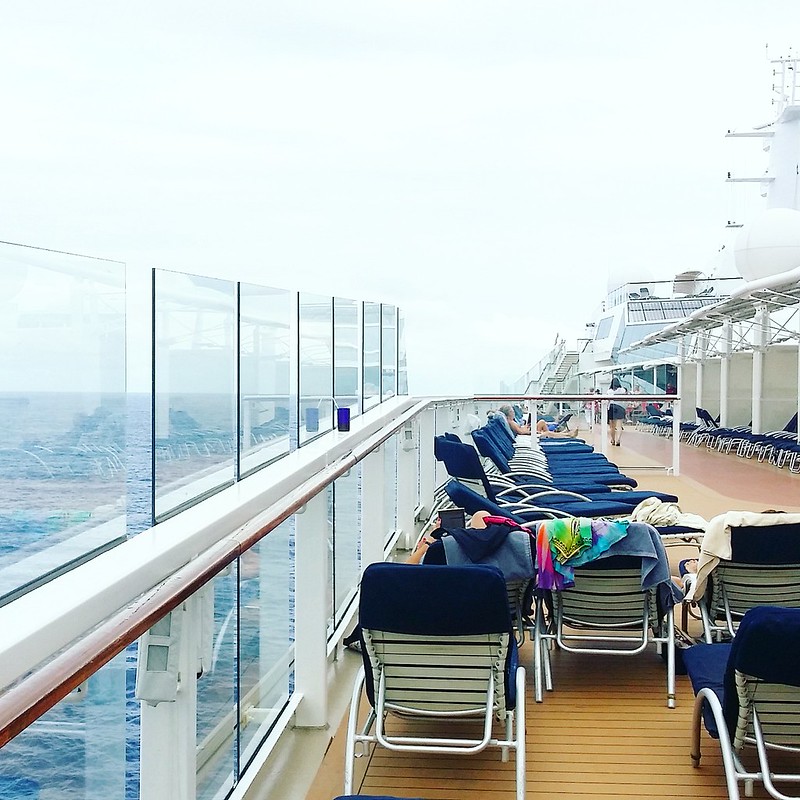 We didn’t have any previous experience of long cruises, but we’d picked Celebrity because I’d read they have superb customer service and dining, and we weren’t disappointed. As customer service experiences go, this was the best I’ve ever had, with top notch service continuing for the whole 10 days we were on board. Stateroom attendants were looking to our every need, housekeeping was as unobtrusive as you could wish for, and dining room staff were pleasant every day and evening.

Speaking of dining: there were so many options, all of them fantastic. There was a plentiful buffet for those wanting to gorge on delicacies, but we always opted for a sit-down dinner. Dining in Silhouette, the ship’s large dining room, was more than enough to satisfy our appetites (one word: escargot – we had them every evening!), but there were also several specialty restaurants on board that we tried. There were some real fine dining experiences with lobster flambéed in cognac tableside and a truffle ravioli that proved to be the best pasta I’ve ever tasted. It’s a miracle we didn’t gain more than a couple pounds on the cruise.

4. …and of course the beaches.

We only hit the beaches on two islands, so they weren’t as prominent on our trip as we had presumed beforehand. All the beaches we went to were fantastic, but two were above the rest.

Virgin Islands National Park on Saint John was the kind of Caribbean you could imagine European settlers falling in love with hundreds of years ago. Thanks to its status as a protected national park, the beaches remain mostly untouched with long stretches of white sand and incredible turquoise waters. Because of high winds that day, we had to skip snorkeling, but instead we hiked a short way to Honeymoon Bay where we spread our towels on the sand. We weren’t the only tourists on the beach (far from it), but on this particular stretch, we were the sole sunbathers.

The other beach that will stay forever in our memories was Maho Beach on Sint Maarten. We spent three hours here swimming and sunbathing, but that wasn’t the reason to come here – but the close proximity to the airport. Check out the photo below and you’ll understand why.

Would I go again? Absolutely! Maybe not on the same route and possibly not on the same boat – the islands were great and Celebrity Equinox a fantastic experience, but it was so luxurious, a trip so fit for a honeymoon, that for our next trip we could go a little more down to earth. Luckily there’s range and variety in the Caribbean, and we’re already planning our next holiday there. I used to smile a bit at those with a cruise fever, but I might have caught the same fever myself. 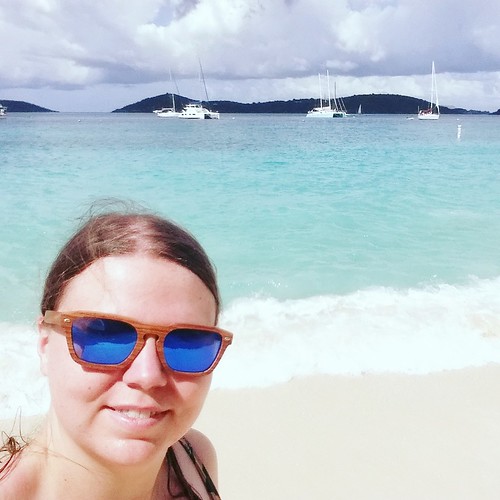 In Partnership with Celebrity Cruises 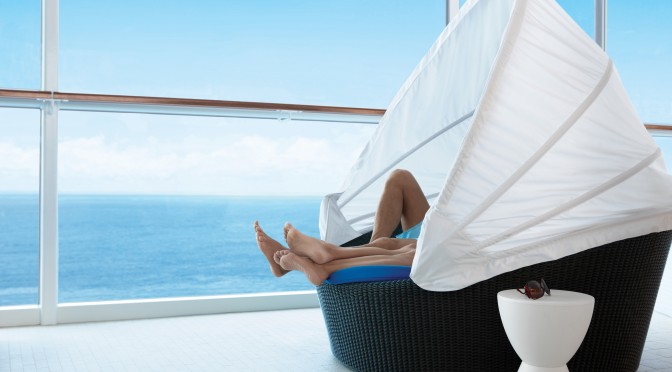 I doubt anybody’s surprised when I reveal that we planned our honeymoon just as much if not more than our wedding. We got married last September and planned to go on our honeymoon straight after, but with so many plans and a hectic fall, we decided to postpone it for this year. Now it’s only two weeks before we leave on the trip of the year! Where, you ask? Well, here:

For our honeymoon, we reserved a 10 night cruise on the Caribbean with Celebrity Cruises. We’ve never been on a cruise before – if you don’t count the party boats sailing between Helsinki and Stockholm, and you don’t – and the reason we picked one for our honeymoon was to have time to relax. You see, I have a tendency of packing as many things in a trip as I possibly can, and there’s not too much you can do on a cruise ship while it’s sailing at sea. But don’t worry, we won’t spend all of our days just tanning by the pool. Shore days are a time for adventure!

We picked Celebrity Cruises as our cruise liner, because we heard they have a great offering for honeymooners. Better food than usually on cruises, a pool area that’s adults only, lots of shows and entertainment for an adult audience, ships that are just a touch more luxurious than normal, plus a honeymoon package for those who have celebrated their wedding max 6 months before the cruise. I’ve heard rumors of what this will enhold, but I’ve intentionally tried to ignore them. Hey, I like surprises!

We wanted a cruise that would last more than a week and would have both sea and shore days, and that’s what we got. We reserved a cruise with 4 sea days and 5 shore days and departing from Fort Lauderdale, partly because flying there from Colorado is cheaper than to Puerto Rico, but also because that’s the reason for the sea days, while the ship sails towards South Caribbean. The ship stops on four different islands, like this:

The first stop won’t take us out of the US yet but will land us on one of its territories. Guess which country sold these islands to the US in 1917? Denmark! This was because slave trade had been forbidden already in the 19th century, which made sugar plantations unprofitable when you had to (gasp) actually pay to your workers, and Danes were spending a ridiculous amount of their budget supporting the economy of these faraway islands.

The ship will park for a day at the port of Charlotte Amalie, the capital, on the island of St. Thomas, but we won’t stay there for long. We’ve already reserved a shore excursion that will take us on a boat ride around the nearby island of St. John and drop us off there for around four hours. Once there, we plan on visiting the Virgin Islands National Park. Looking forward to some snorkeling and hiking!

The second stop on our cruise will be a day at the island of Saint Kitts. This former British colony drives cars on the left side of the road, and renting a car would require obtaining a “guest driver’s license”, so we’re still contemplating on how we’re going to get around the island. One way or another we’ll visit Brimstone Hill Fortress, which is a UNESCO world heritage site and a little way out of the capital.

I doubt the Fortress will take the whole day, so we’ll probably do something else, too – but what? Hike up a volcano in a rainforest? Visit a sugar plantation? Drive around the island, checking out fishing villages? Hang out at the beaches and beach bars? If you’ve been to Saint Kitts, please leave a comment!

The most Southern point on our cruise, Barbados is an anomaly among the Caribbean islands, out East from the main group and not even formed around a volcano. It’s also by far the most populous island on our trip, and it’s capital, Bridgetown, is on the UNESCO list of world heritage. Therefore I’m guessing we’ll spend a day wondering around the streets and checking out the sights of the city.

Here’s an island that’s neatly divided in the middle by two countries: Netherlands and France. Both countries still govern their side of the island, explaining its two similar-but-not-quite names. We’re spending a night here, because the ship will arrive to port early afternoon and only leave early next evening.

We’ve already rented a car on the island and plan on checking out both sides of it. I’ve heard the French side is smaller, quieter, more charmant, while the Netherlands side has one sight we won’t miss: Maho Beach, right at the end of a runway at the airport. This is how that works out: Which one is your favorite island out of these? Do you have any tips for us before we leave?

In partnership with Celebrity Cruises