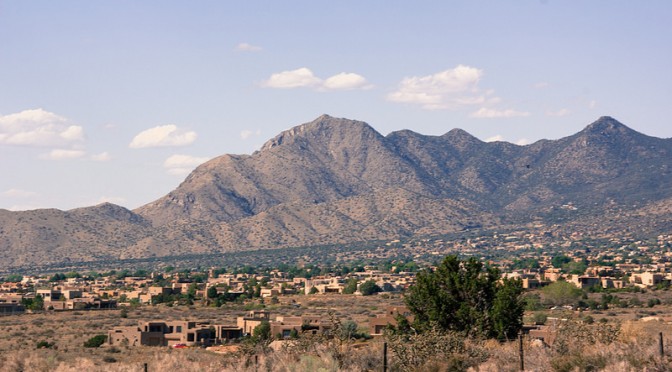 On a roadtrip to New Mexico, I thought we’d spend our day in Santa Fe perhaps enjoying the museums or driving to Los Alamos to find out about the history of the bomb, but instead, Iiro insisted we drive to Albuquerque to setjet around Albuquerque’s Breaking Bad locations.

…well, not really. The lab was of course in a studio, but the laundry itself was featured several times in the show. We found it in the middle of North Albuquerque’s industrial district and ended up driving past the place a couple times before we realized it was really it. 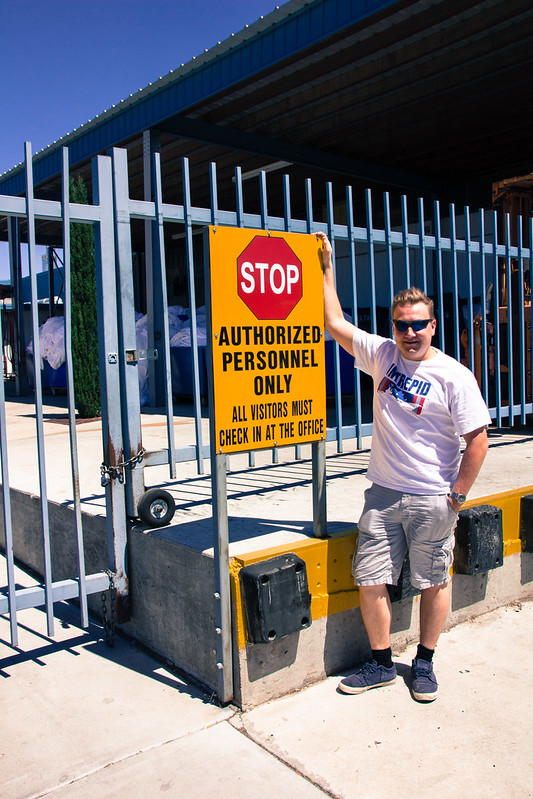 Even after we had parked, we were unsure about the place. Is this really it? The front had never been shown in the series, so we had trouble recognizing the place. However, all doubts were erased when this parked beside us:

Looking back at the show side-by-side with photos of the laundry, there’s no doubt. Same piles of linen still in the back yard: 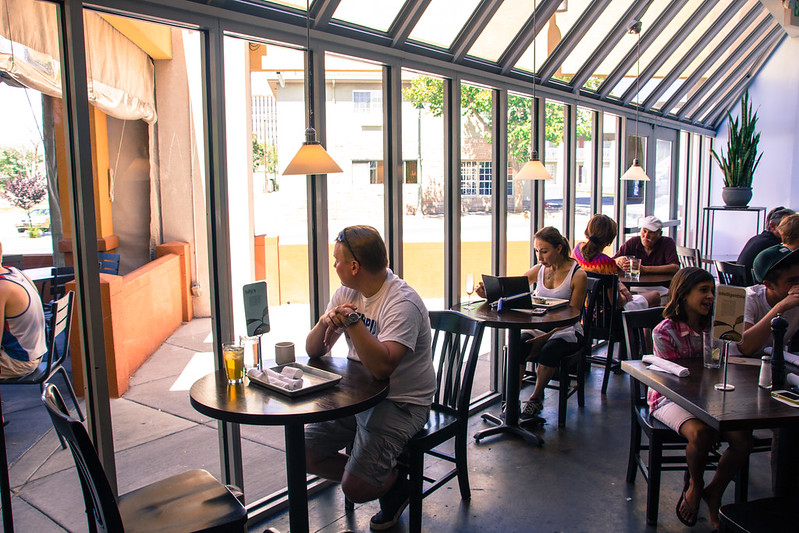 It was lunch time, so we decided to head out next to one of the many restaurants featured in the show. We picked The Grove, a local organic hipstery cafe, which was so full at lunch we were lucky to get a seat. Of course we sat down at a window table, because that’s where Lydia and Walt sat in the show, too.

Some customers were working on their laptops with big cups of tea or coffee at hand, some had clearly come for a Sunday brunch with the family. The restaurant’s apparently close to a college campus, so many seemed to be students, and nobody looked like a tourist. It didn’t exactly seem like a restaurant where I would go to conduct my drug businesses, but it fit Lydia’s style perfectly. 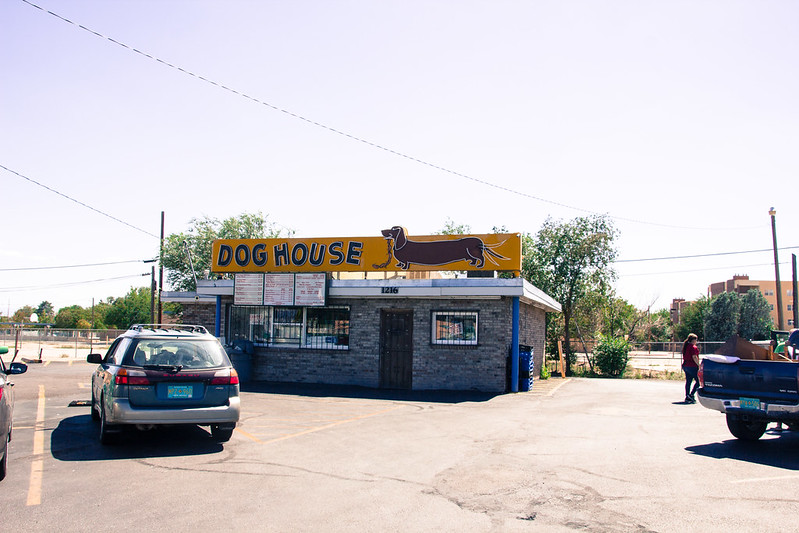 USA is a land of drive throughs and drive ins. The former means you drive along a lane up to a window to order whatever it is you want, the latter that a waiter will come and take your order from the car. Dog House was this latter type of drive in. 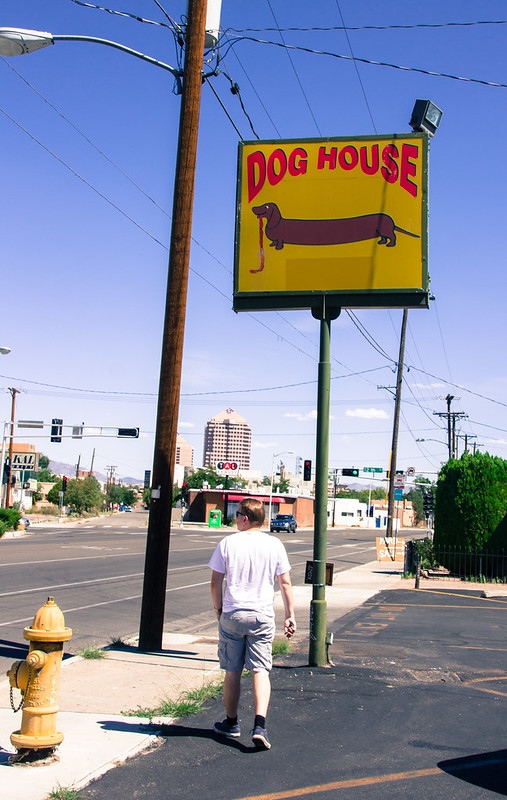 In Breaking Bad, this hot dog stand was never shown in daylight, and I gotta admit seeing it in daylight doesn’t make it any less shady. We didn’t try the food. 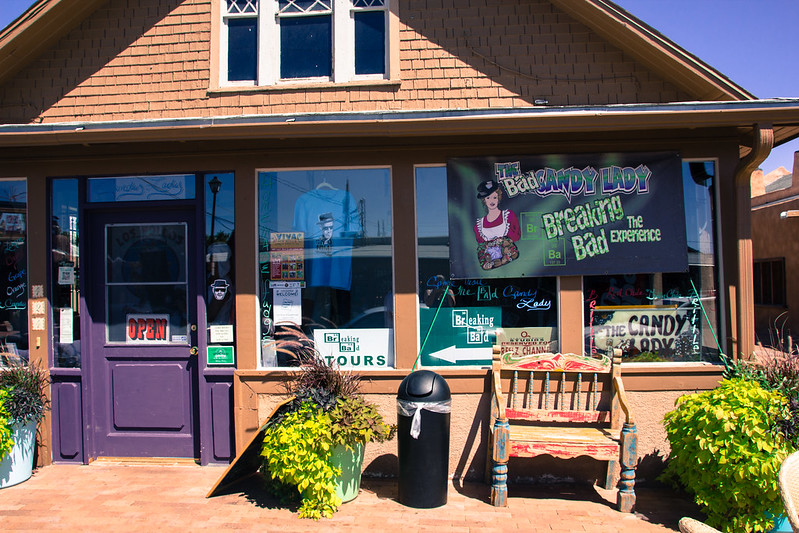 Do you have the blue stuff?

This place was never featured in the show, but it still played a major part. Everybody who’s ever watched the show will remember the blue methamphetamine that made fortunes in the show, and this was local production: candy from a local Albuquerquean candy maker, The Candy Lady. 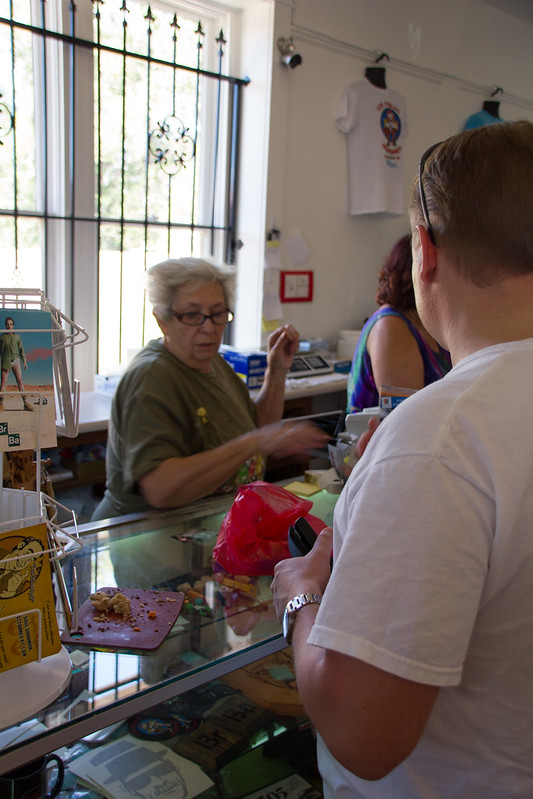 We spent a while looking around the shop for the blue stuff and finally asked the lady behind the counter, who said they only have it behind the counter. After making the deal – for considerably cheaper than in the world of Breaking Bad – the lady made sure we’d go and take a photo in the corner of the shop with some appropriate props. Here’s Iiro: 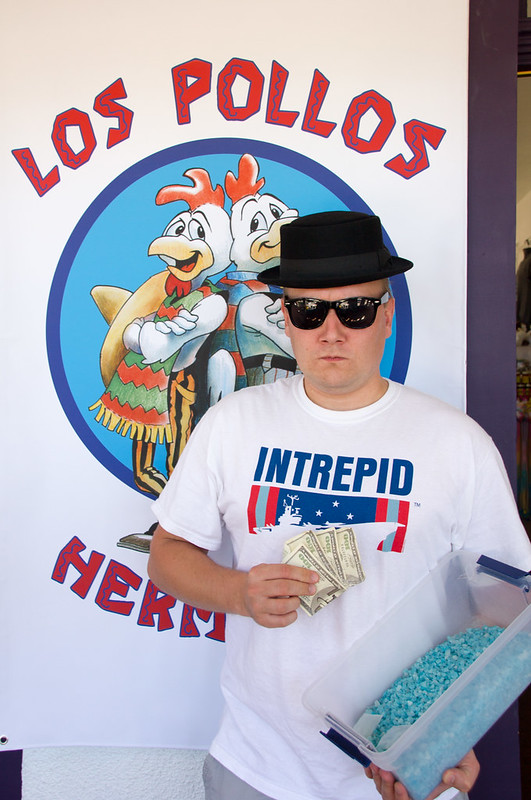 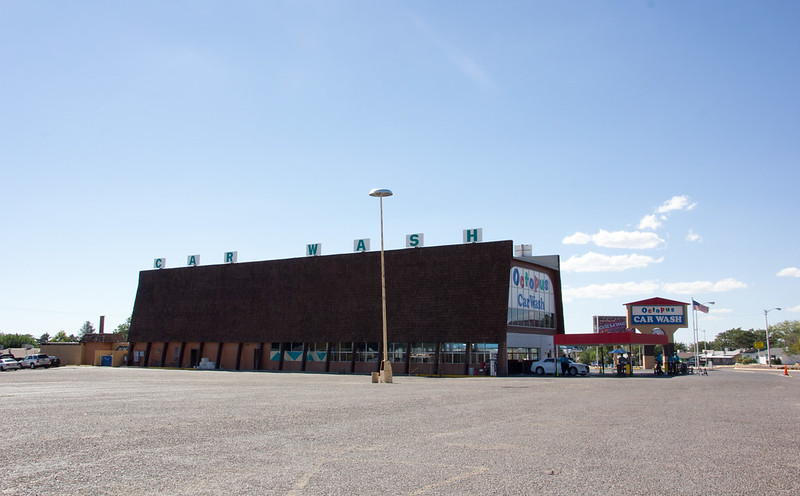 Car wash that washes your car and your money

We spotted its memorable shape from afar: that’s the car wash! Our car wasn’t particularly soiled, but it needed vacuuming, so we became instant customers.

USA is full of car washes like these, but they’re rarely in such a distinctively recognizable place, so it’s no wonder this one ended up on Breaking Bad.

The Car Wash has since changed it name and is now apparently called Mister Car Wash. It’s at 9516 Snow Heights Cir NE and open daily 8-18. 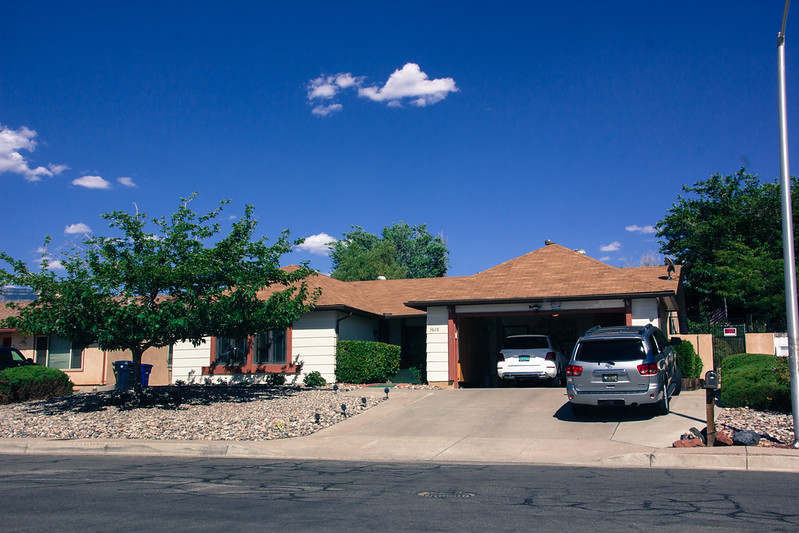 Yep, there it is, Walter White’s home. In the middle of Albuquerque suburbia is a house that millions of people would recognize, and this is when we almost got cold feet: is it really appropriate to go around, taking photos of random people’s homes? 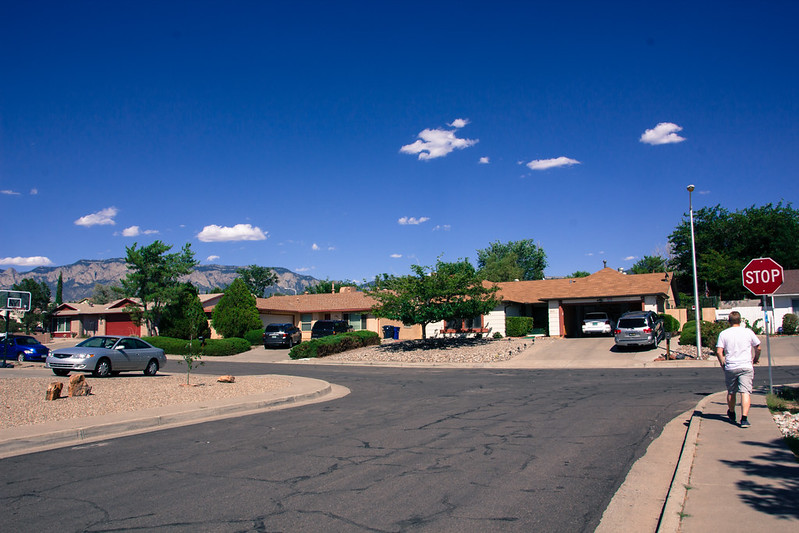 We parked a little further down the street from the house so as not to raise any attention and started nonchalantly walking past the house. Probably our behavior was screaming TOURIST to miles away, because a woman stepped out of the open garage and shouted to us that we were welcome to take photos as long as we didn’t step on the lawn.

The owner of the house had set up a table with soft drinks in the garage and was clearly waiting for someone – maybe a Breaking Bad tour bus? – so we were able to chat to her a bit. She told us they’d given their address to an agent who connects TV and movie productions to sets, and they had no idea how famous the show would become when their house was booked for the pilot. Now cars drive slowly past their house at all hours of the day, and while we chatted with her, we spotted two other obvious tourist cars making the drive.

Filming took less than a week per season, which sounded very short, until we realized only the outside of the house is featured in the show; the insides were filmed in a studio. We didn’t dare to ask if the swimming pool in the show was also theirs, but judging from Google Maps images, it is. 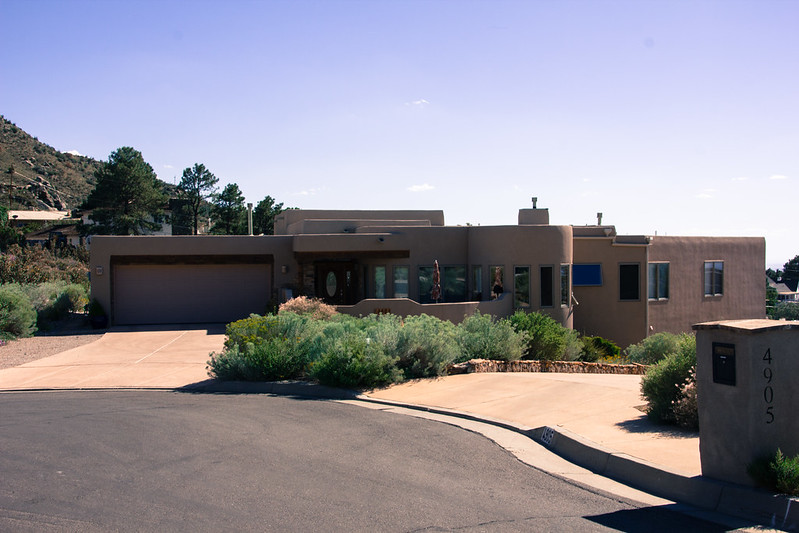 Living the life with a DEA salary

After Walt’s house, we of course wanted to see where Hank and Marie live, and it wasn’t a long drive – but the socioeconomical jump was huge. Walt’s home was part of middle-class suburbia, but Hank and Marie were living on a hillside with great views and mansions obviously designed by architects.

Iiro wanted to park right on front of the house and get out to look around, but I was nervous someone would call the neighborhood watch or cops on us, because we’d look so “suspicious”. We didn’t spend much time here. 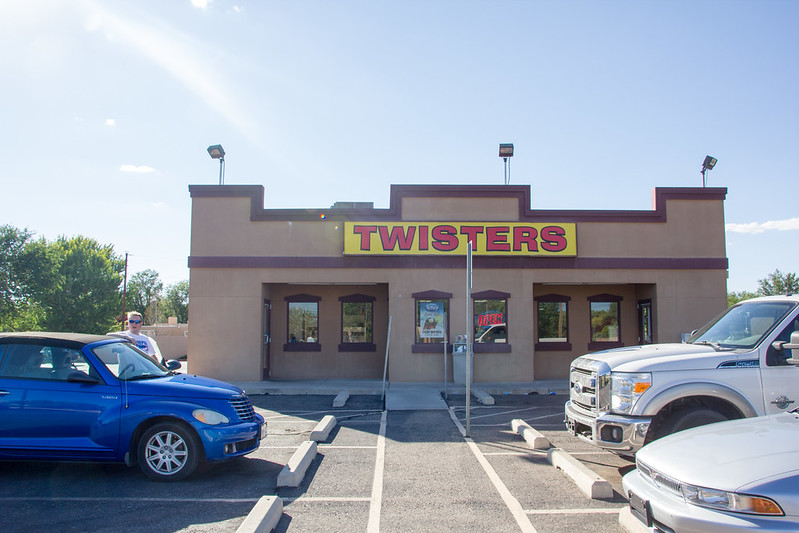 Los Pollos Hermanos – would you like drugs with that?

In Breaking Bad, a fast food chain owner used their enterprise logistics to transport drugs, and many deals were made in one of the chain’s restaurants. In real life, there’s no such chain as Los Pollos Hermanos, and the restaurant instead is part of a chain called Twisters that sells pretty good New Mexican grub – like green chile burritos – and the restaurant itself is basically in the middle of nowhere.

The restaurant is South of Albuquerque in an area with mobile homes and car repair shops, but the food’s excellent and makes a visit worthwhile! 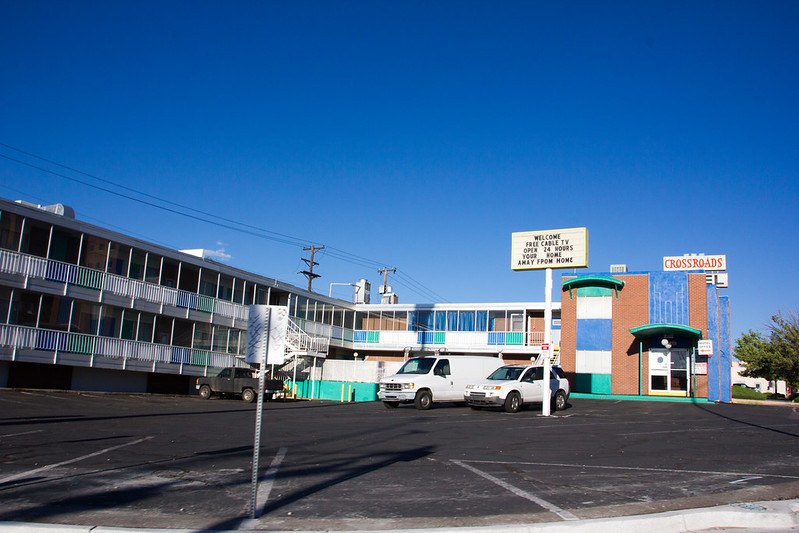 Remember the motel that Jesse escaped to for some time alone with drugs and whores whenever shit hit the fan? It really exists, and it looks even more shady in real life than on Breaking Bad. 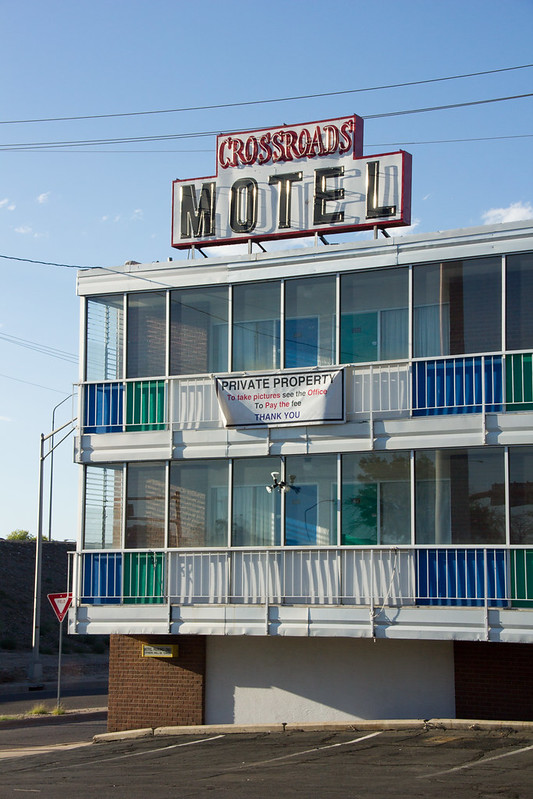 Crossroads Motel is pretty much your average American roadside motel, but it’s decided to make some extra cash with placards that say you need to pay in order to take photos of it. That says a lot about the motel, and I have some serious doubts about the legality of those signs. We didn’t bother going in.

Yksi kommentti postaukseen “Breaking Bad in Albuquerque – this is what the sets really look like!”